We have recently returned from the final phase of development at the latest Cripps wedding venue. Healey Barn is set in the Northumbrian countryside near the small village of Healey, it is made up of a collection of traditional stone farm buildings surrounding a sheltered courtyard. 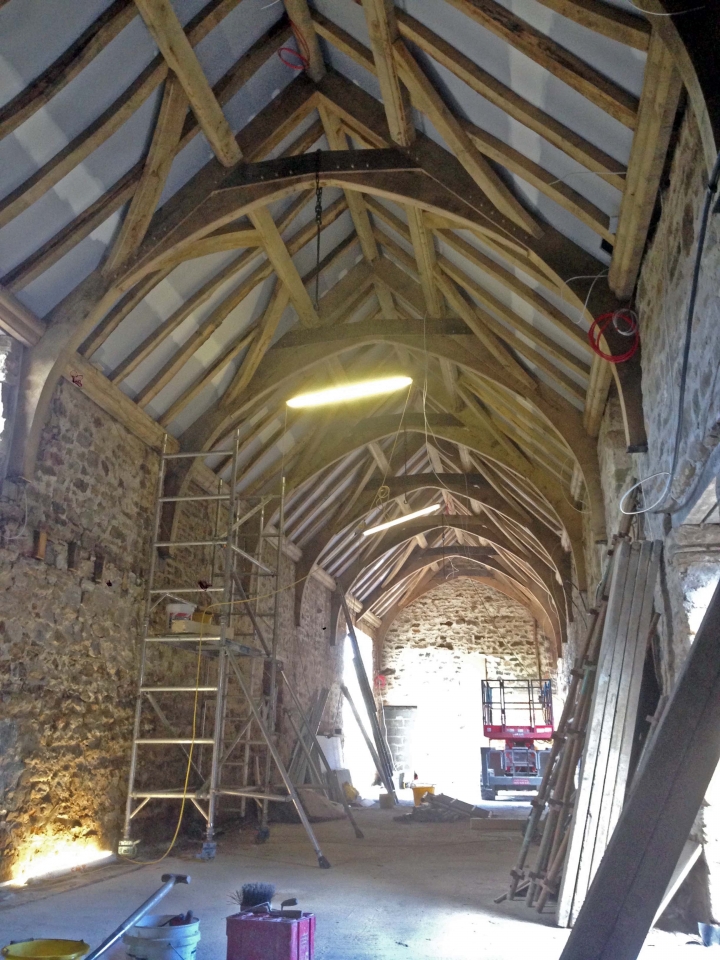 EmanuelHendry Ltd were commissioned to replace the roofs on both the Long Barn and Dining Room. Joinery and a glazed wall were also installed on the Dining Room. We also produced and installed a large set of glazed doors, which are to be the entrance into the long barn. 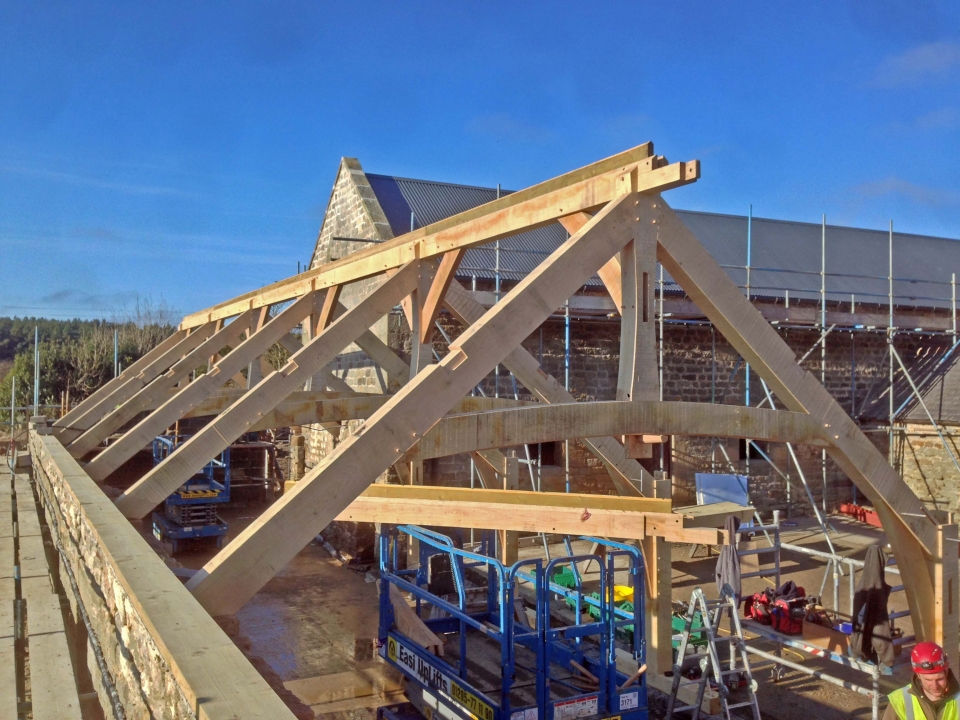 The roof of both the long hall and dining room were completed in oak. the Long Hall roof is an 8-bay raised cruck roof with arch braces and collar. the Dining Room roof is a 9-bay, king-post truss, complete with tusk tenon connection between the king post and collar. The Dining Room also features a glazed wall, with several double doors that open onto the internal courtyard. 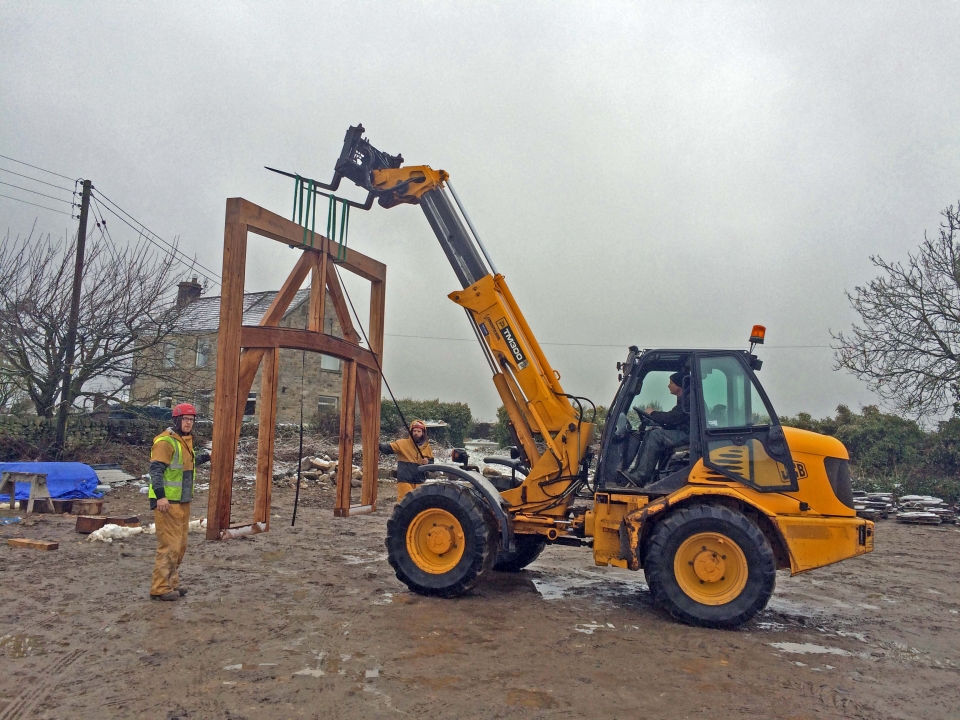 Completed over several phases, the installation was a joy to undertake given the famous northeastern hospitality and positively barmy weather conditions (note snowy conditions in some of the photos!) as the local tradesmen eloquently put it. 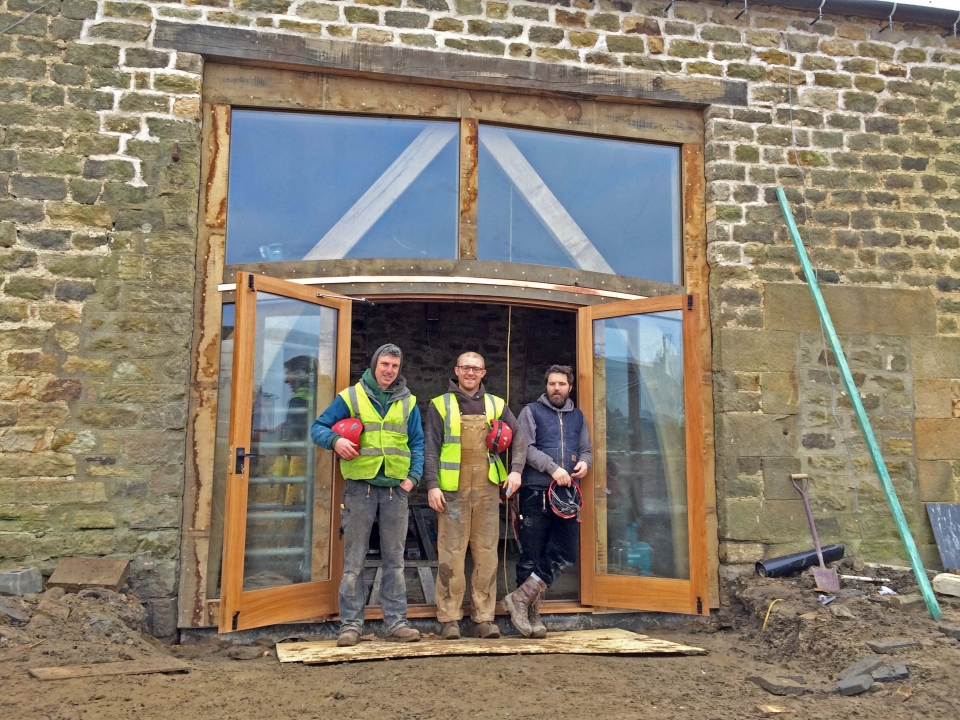 With their first wedding scheduled for early June, the whole site has been transformed from a collection of derelict agricultural buildings into a modern wedding venue

More information on the venue, including how to book can be found here.

Emanuel Hendry Ltd were contacted by Artist Robin Dutson in late 2008 with the idea of constructing a two storey art studio for him to work on his full size fruit tree replicas. Taking 6 years to come to fruition - the building was completed in the winter of 2014. 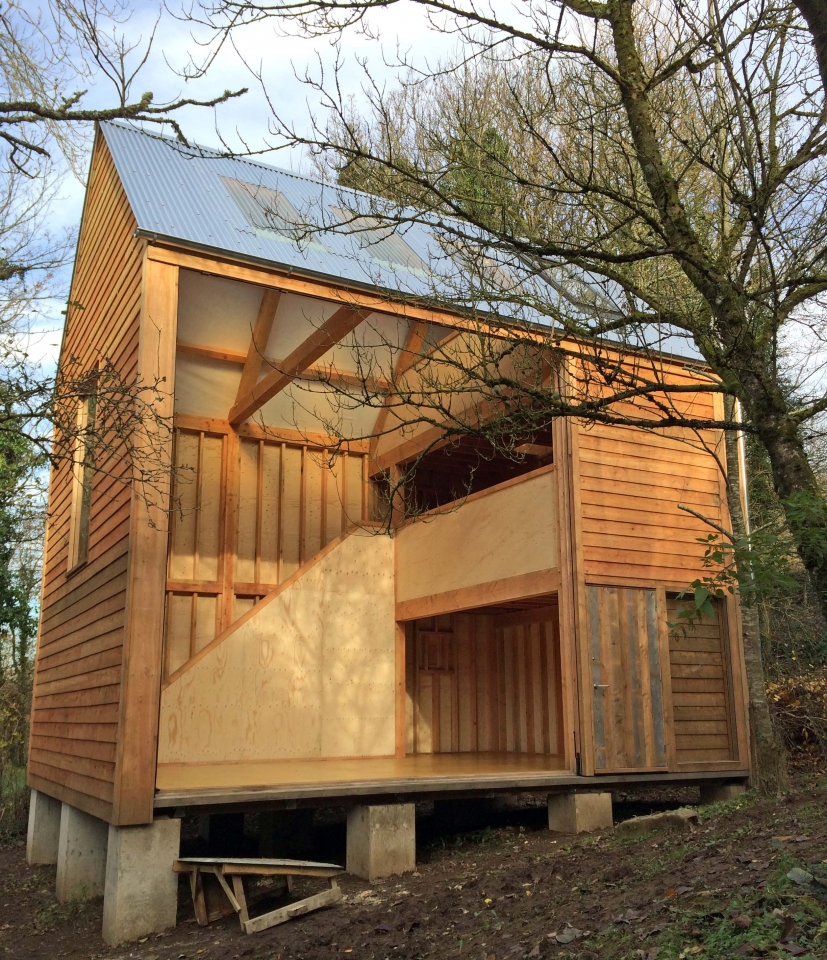 As part of the design we were asked to include a set of full height sliding doors on one aspect of the studio. This would enable Robin to easily transport the materials to and from the art studio without affecting their shape and structure! 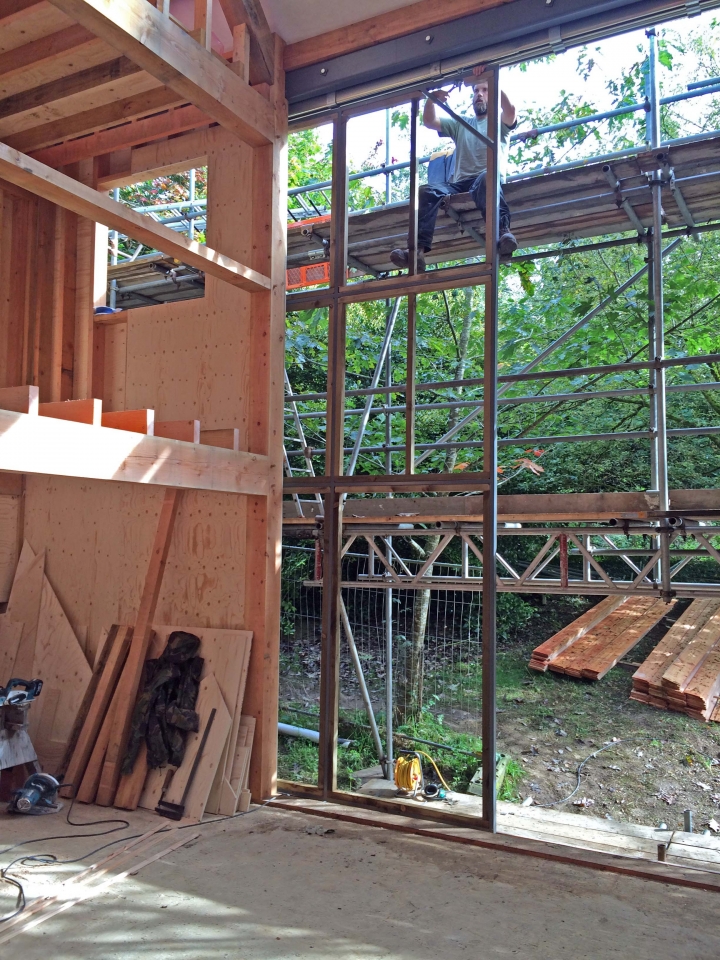 Incorporating full height sliding doors proved to be a challenge in getting the frame to satisfy the structural engineer. It was decided early on that the aspect of the building that contained the sliding doors, would be constructed from a metal frame to hang them from. Our Douglas Fir frame was cut to fit around the metal frame. 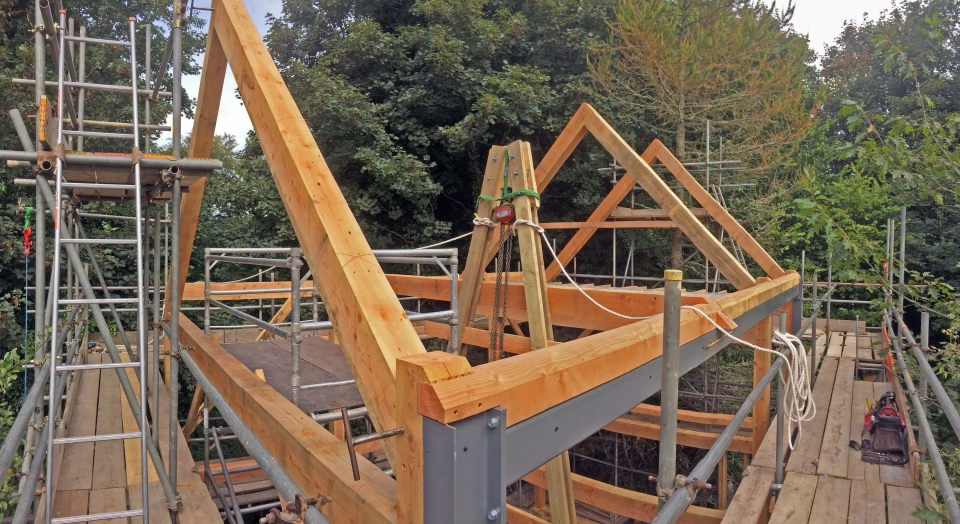 The doors are hung from bearings that run inside metal sliders that run the full length of the building. This enables the doors to be opened such that two-thirds of the interior is exposed. Part glazed, the doors offer a fascinating link between the interior of the building, and the surrounding woodland - providing much of the inspiration for Robin’s work. 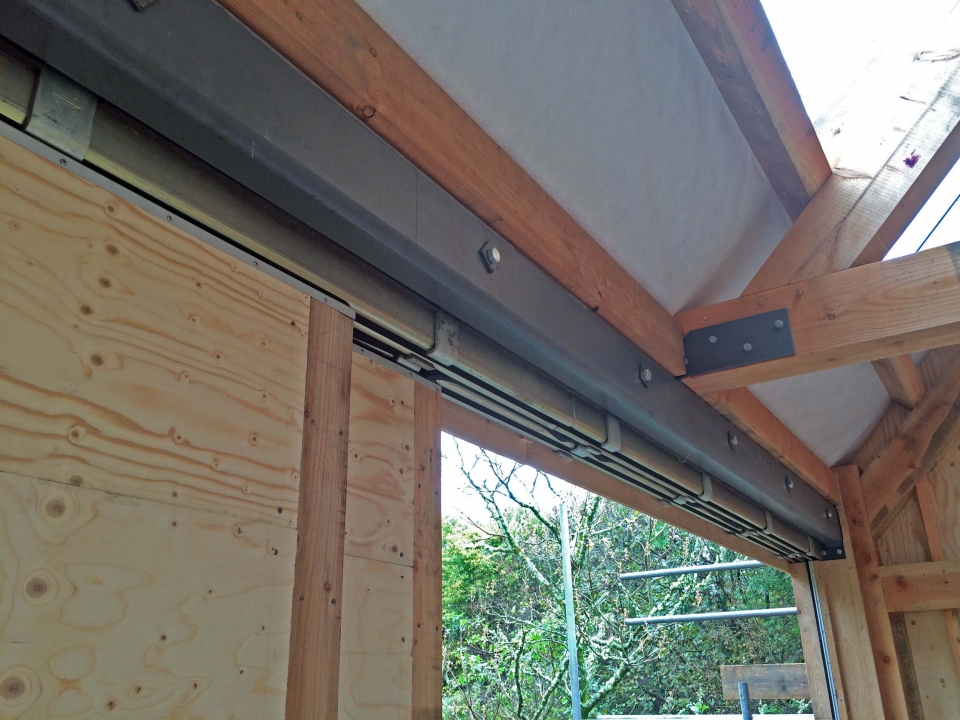 Mid 2014, we were approached by LHC Architects to see if we would like to tender for the creation of a Bunk House for the Rudolf Steiner School, based in Dartington, South Devon. We felt that this type of project fitted well with what we do here at EmanuelHendry Ltd. 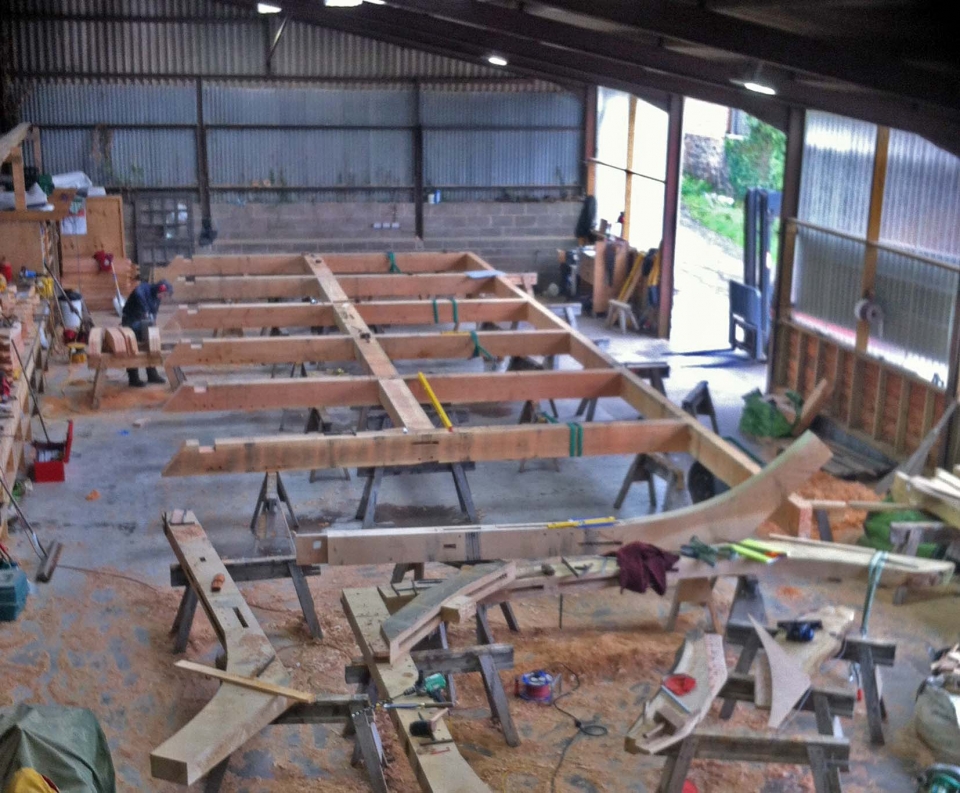 The Bunk House is an 8-bay, 2-storey primary timber frame, constructed from Douglas Fir with straw bale infill to be added upon completion of the frame. 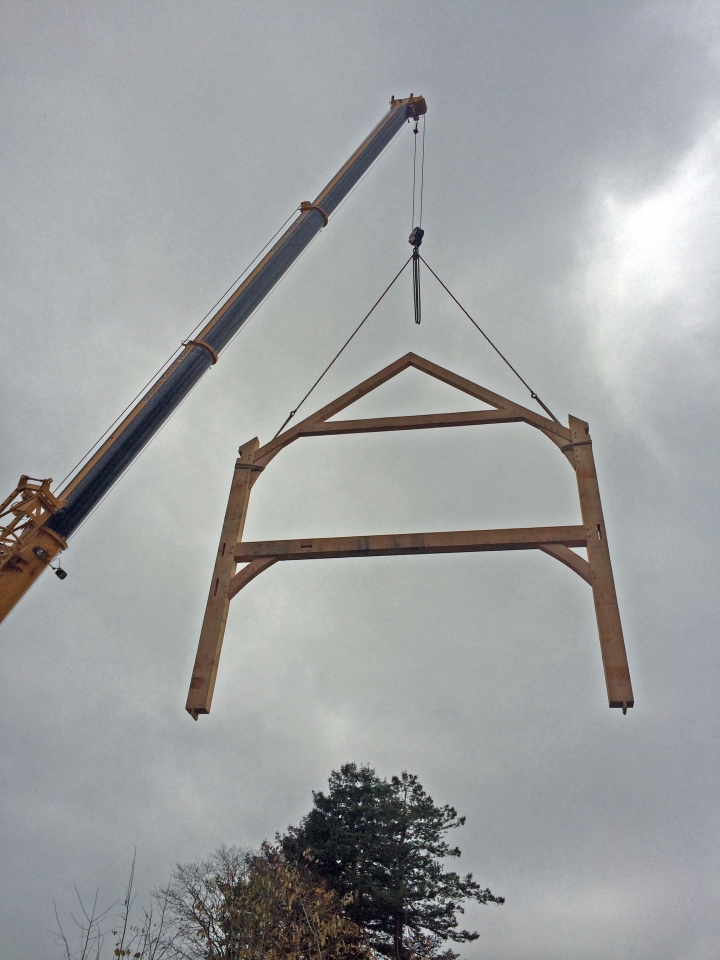 We were joined on site by students from South Devon College, who, as part of their diploma in site carpentry were gaining the experience necessary to go on to become carpenters. They gained valuable knowledge from our carpenter Hugh Arnold, on not only the technical aspects of traditional carpentry, but important aspects of its history to. 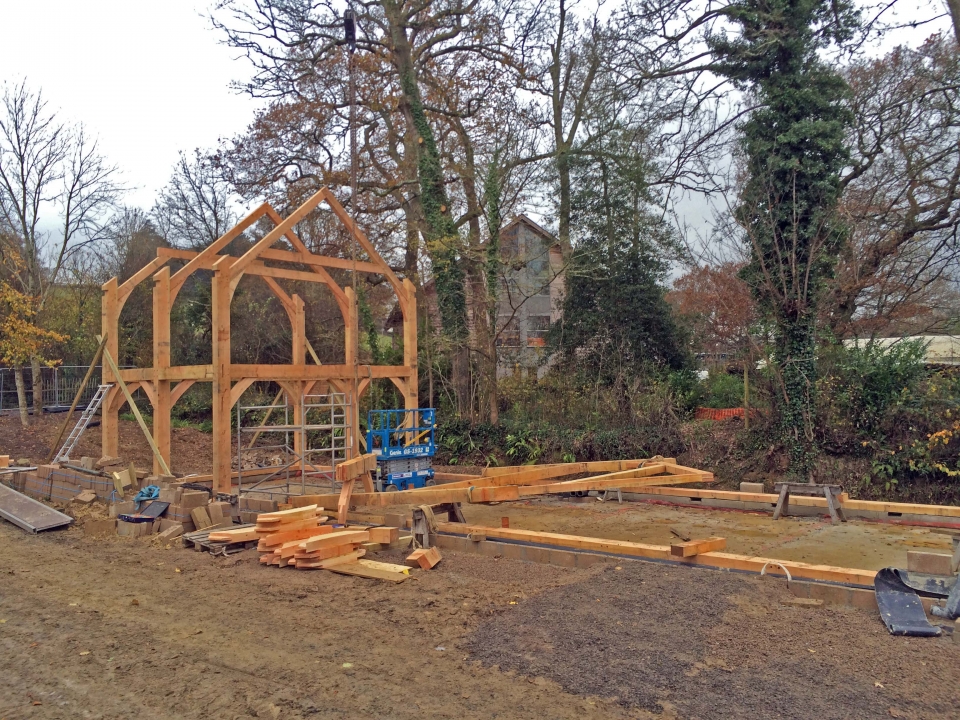 The last oak peg to be driven home and signal completion of the primary frame was done to much fanfare, and in front of a large proportion of the students, by Class 6 teacher and Vision Group Chair Jonathan Liddle. Prior to the peg being hammered home, a class at the school had written a series of ceremonial writings upon the peg itself. 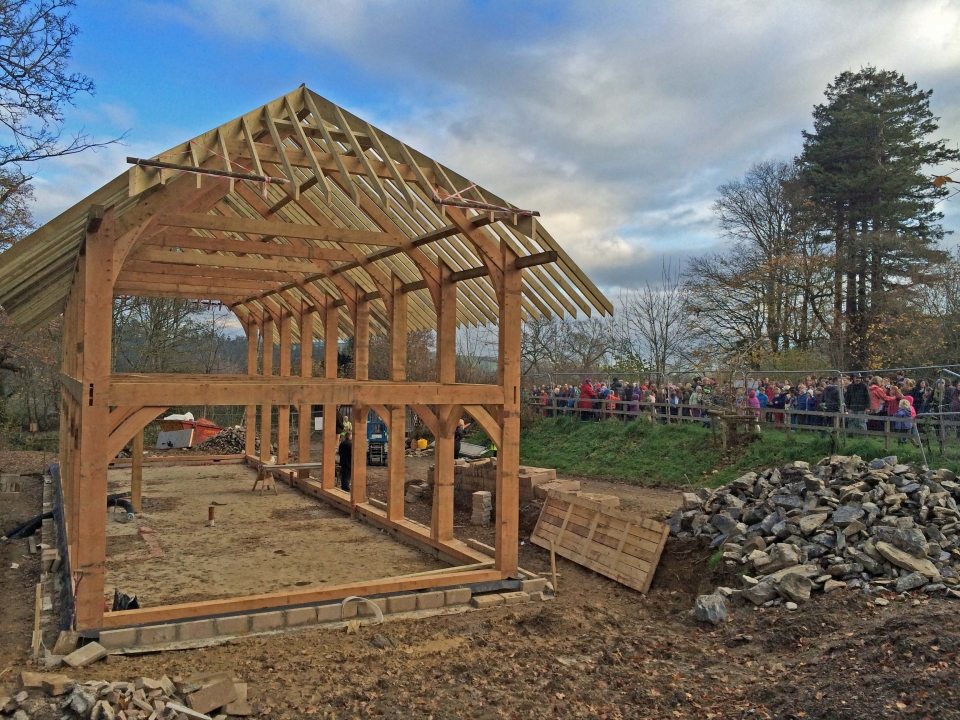 Part of the schools Gateway Project, the Bunk House was designed to offer not only accommodation but communal space, staff rooms and a workshop as well. 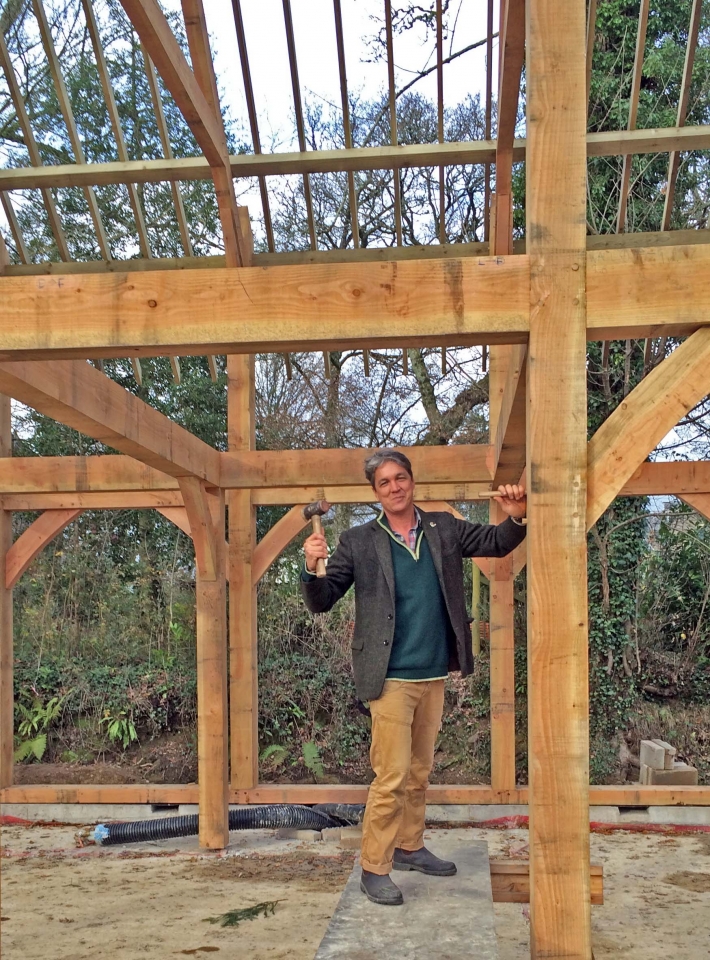