The Dartmoor Arts Project is an artist-led organisation founded in 2006. part of their remit is running courses throughout the year, as well as a summer school. One of their courses is a week long look at spatial structures, it gives students a chance to design and then construct in a 1:1 scale, something usually missing from most architectural courses. The 2014 course design brief, was centred around a bridge that was to be designed and constructed from timber.

EmanuelHendry were approached by the Dartmoor Arts Project to help provide assistance and some technical knowledge, on how best to utilise the materials at hand. EmanuelHendry Lead carpenter Hugh Arnold writs an account of how the week unfolded.

The week began with a group of Architecture students, a few qualified Architects and a couple of others coming together in a cob barn in deepest Devon. The course tutor, Jerry Tate, an architect of some standing in his profession, was an enthusiastic and animated leader. He was ably backed up by Geraldine Holland, a lively and observant architect currently working in London. Following introductions and a site visit to the previous years’  courses, we were straight into the design process. 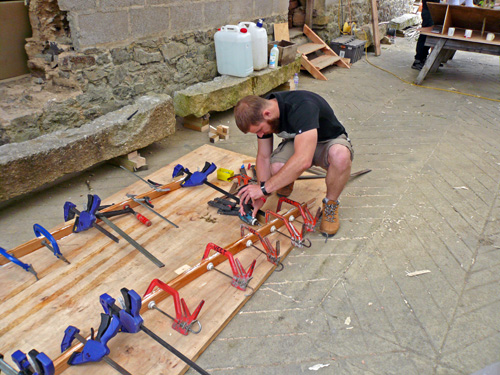 The brief was to build a structure to cross a stream so as to create a short circular walk around the valley below North Cuma Farm. After a consensus was reached on the location of the ‘bridge', each course member was asked to produce a concept for the design. What came out of this, was a curved bridge surrounded by lots of circles! As the Carpentry tutor, I was charged with overseeing workshop and site work, organising materials, teaching woodwork and advising on design decisions. So no wonder I swallowed hard when the group graduated its concept toward a sweeping swooping bridge surrounded by a tunnel of wooden rings of varying size. 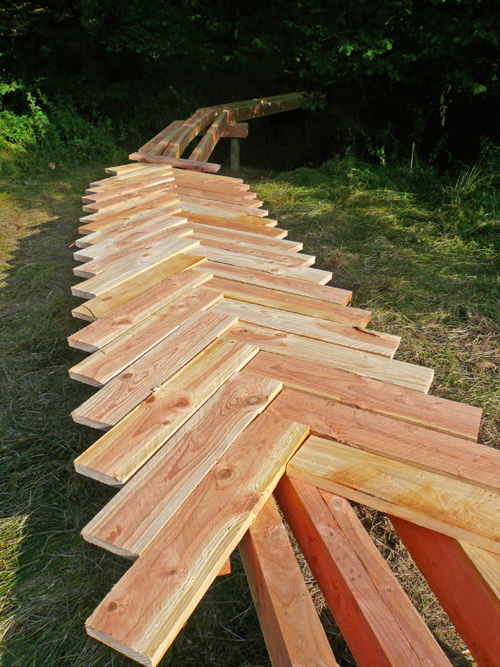 The material available for the build was wood, the sawmill was due on site on the Tuesday so they can be ready to start sawing the wood on Wednesday morning. We needed to have a hard concept, good design and a cutting list sorted by the end of Tuesday. 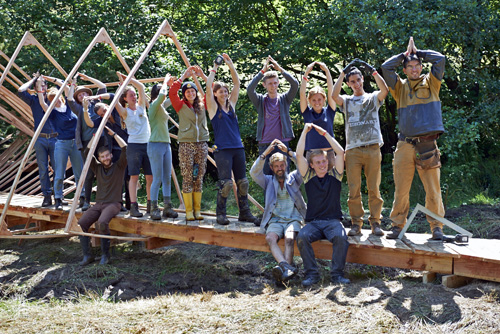 The building of the bridge over the next three-and-a-half days involved long hours,  committed hard work and lots of learning. The group learnt to use tools and materials,.  The Saturday came around, and at about 2pm we had just finished off the triangles (which took the place of the circles in the original design). The “purlins” were finished off, and all of a sudden the bridge took on a life of its own. It had gone from gawky to elegant in about five minutes. The visitors who stopped by to admire the bridge were very complimentary. The team sat down and admired it. They had created a structure, 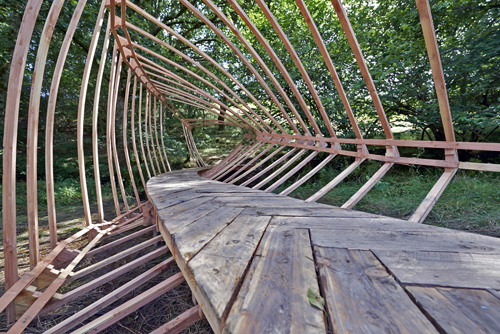 More information and images on both past, present and future courses can be found at the Dartmoor Art Projects website here. 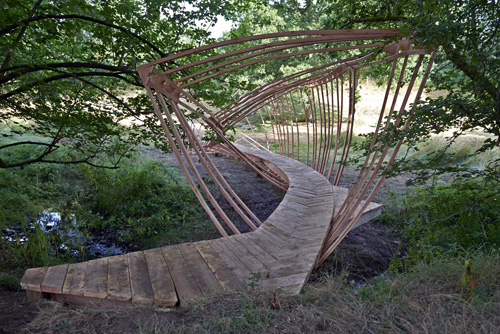