The construction carpentry projects that EmanuelHendry undertake as part of building conservation schemes continue to be one of the most fascinating and rewarding areas of our work.

We have carried out conservation carpentry on a vast range of projects, including historic churches, houses, cottages, barns, stables, and even timber bridges and water wheels.

To be successful at these types of specialist conservation repairs, you need to develop a really deep understanding of the history of the building you are working on. What specific period does it date from?  What was the original purpose of the building? What style was it created in? What were the original materials, tools and construction methods used? How has the building been adapted and repaired over the years? Only when these questions are answered can you begin to formulate an approach to the conservation carpentry work that will truly enhance its existing character and beauty.

In depth knowledge and understanding

Although timber construction and timber frame buildings have played an important role in our built environment for many centuries, there have been a number of distinct phases in the way that different materials have been employed. For example, up until the 17th century, English oak was in relatively plentiful supply. But after a boom in house building during the Elizabethan period and a lack of new woodland being planted, supply became more restricted. More and more of the best quality oak was being reserved by the navy to build the ships needed for the country's growing empire. As a result, by the end of the 17th century, imported softwoods were beginning to be used more widely in timber frame constructions.

This type of in-depth knowledge was vital when EmanuelHendry undertook the conservation repair strategy for eight precious historical buildings in Dartmouth that had been damaged by a devastating fire on Higher Street in the town centre. Some of the properties affected were 16th century Tudor buildings which featured ornate carved wooden figures on the exterior. The aim was to recreate the original form and character of the buildings, by incorporating new work while retaining as much of the original fabric of the buildings as possible. As well as testing our conservation carpentry skills, this project also required a deep understanding of the materials. In order to achieve a seamless result, the quality and direction of the grain in the new wood had to closely match that of the original material. Similarly, the moisture content in the new wood had to be the same as the original to avoid movement and separation of the elements over time.

To carry out these projects you need a conservation carpenter who combines a wide range of attributes. As well as high levels of craftsmanship and skill at shaping wood, they must have outstanding attention to detail and the patience to take care at every stage of the process. When timber is in an old and fragile state, it needs careful analysis and thought to work out the most appropriate course of action. There can be complex reasons why the material has decayed and you must take these factors into account when planning how you will preserve the building well into the future.

The construction carpenter also needs to be able to build open and positive working relationships with other stakeholders on the project, such as architects and Heritage Officers, and be able to communicate openly and accurately with their clients.

In the footsteps of master craftsmen

One of the great thrills of working in building conservation is that you experience close up the brilliant craftsmanship and expertise of carpenters from previous centuries. One of the commissions we received was a conservation carpentry project in the village of Laployd Barton, which is a small hamlet that was originally settled in medieval times. Our project was to restore the roof of a Grade II listed stable which is believed to date back to the early 1600s. It was fascinating to be able to trace the handiwork of the original carpenters who had worked on that building, one which had stood for nearly 500 years, and to feel that you were following in their footsteps. With a restored wooden roof structure which was then thatched, the building has now been returned to its original purpose as a stable block, and there is no reason why it should not survive for many centuries to come.

Every so often, a conservation carpentry project emerges which gives you the chance to reach out and touch a unique part of our history. A case in point is a commission that EmanuelHendry recently received to restore the oak gun carriages for two historic cannon in Exeter.

These cannon were part of a batch that had been sold to Russia in 1789 to help arm their navy fleet at Archangel. It was originally thought that they had been used at the battle of Waterloo. At the end of the Napoleonic wars they were obsolete and fifteen were returned to England via Exeter Quay, as it had been planned to use some of them for the Wellington Memorial in Somerset. However, the committee overseeing the memorial discovered that they hadn't in fact been used at Waterloo and refused to take them. So the town council used four of them as ship's bollards and had the rest buried. Today, only two of these unique cannon survive and they now have pride of place in front of the Custom House in Exeter. These precious historic artefacts that were nearly lost forever will now be returned to their former glory so that future generations can continue to enjoy them.

At EmanuelHendry we feel that it is real privilege to be involved in conservation carpentry work like this, work that helps to preserve our fascinating history and heritage, and to give it an exciting new lease of life. 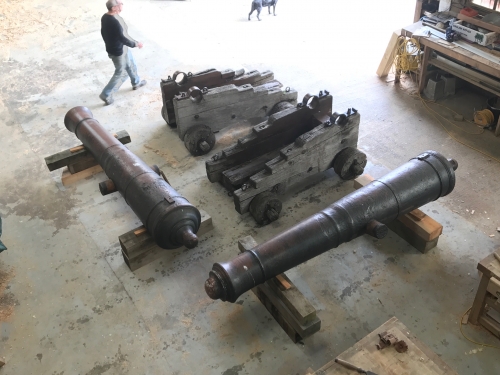